Review: The Gulp by Alan Baxter 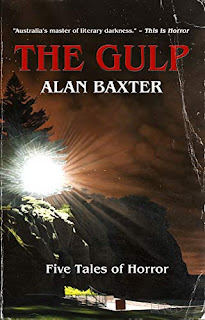 Disclaimer: I received e-book version of from the author in exchange for honest reviews. All thoughts and opinions are my own.

The town of Gulpepper, known as "The Gulp" to locals, appears to be a small, quiet Australian harbor town. No one wants to stop there, the police won't come if you call them, and locals know that you can never really leave.  While things are quiet and business as usual during the day, everyone knows that you shouldn't be out in The Gulp after dark. In these five interconnected novellas are just a taste of what goes on in The Gulp.

We are introduced to Gulpepper in the first story, "On the Rim," by veteran truck driver George on his last shift to The Gulp training his replacement, Rich on his weekly route. George warns Rich to make the trip to The Gulp as quick as you can and then get out of town before dark. Rich takes this as the old man playing a trick on him and ignores his advice. While dropping off their load at a grocery store, there is an accident with their truck, forcing them to stay in The Gulp overnight. Despite George's advice not to go out at night and ignoring his requests for him to stay in the truck until the tow truck comes in the morning, Rich decides that he wants to get to know the town. He heads out and quickly finds himself in more trouble than he bargained for.

In "Mother in Bloom," we meet teenage siblings who are dealing with the aftermath of their mother's death and how to cover it up so that they aren't separated by social services. When the mother's remains morph into something unexpected, the siblings learn exactly just how far they will go to stay together. The characters and events in this story get a lot of callbacks throughout the book. This story, I feel, does have some mild body horror.

The third story, "The Band Plays On," introduces us to the legendary band Blind Eye Moon via a concert attended by four tourists visiting The Gulp while on holiday. After bonding with the band during the show, the tourists are invited back to their house to party afterward, and end up staying at the band's insistence for a few days.  The party keeps going and the booze keeps flowing, and soon the nightmares begin. While one of the tourists gets suspicious, the remaining three start looking and feeling haggard from the late night parties and subsequent nightmares. And the band is eager to keep the party going at any cost.

"48 To Go" is my favorite story in the collection, and when you read it, you'll know why. This is without a doubt, one of the craziest stories I've ever read.  After getting his mob boss's drugs stolen,  a local thug is given 48 hours to collect the $60,000 owed to his boss, or never be seen again. The lengths this character goes to is bonkers. This story has notes of occultism mixed with the supernatural. One thing is for sure, Baxter has changed how I look at guinea pigs for the rest of my life with this story.

The last story in the collection is "Rock Fisher," a tale of both eldritch horror and body horror.  After suffering a painful breakup with his girlfriend, a character goes fishing and catches an entity that takes over every area of his life and will change life in The Gulp as we have come to know it.

I thoroughly enjoyed every page of this book and was sad to see it end. In creating The Gulp, Baxter has created his own playland mash up of Innsmouth and Castle Rock. There are so many more big background stories to be told and so many more inhabitants to learn about. I hope we get to visit The Gulp again soon.

Brandi the Bibliophile
Orlando, Florida, United States
Welcome, I am Brandi Guarino. I am a voracious reader and have a To Be Read list that will never end. As an avid reader since childhood, my biggest dream was to read books for a living and get paid to do it. Through college I worked as a bookseller for the Borders/Waldenbooks family of stores. This job was excellent training in assisting readers in finding books that would fit their reading style, while also selling them on books that they hadn't considered reading. There is no better feeling than getting the right book to the right reader. I am passionate about reading and championing the work of independent writers in horror, science fiction, and fantasy, as well as working with independent publishing houses.